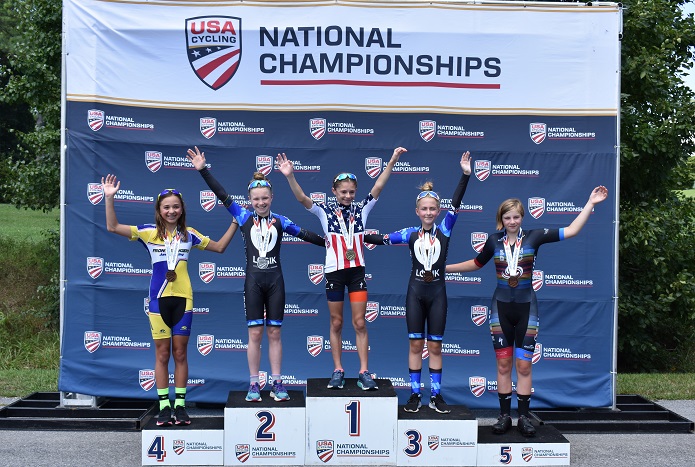 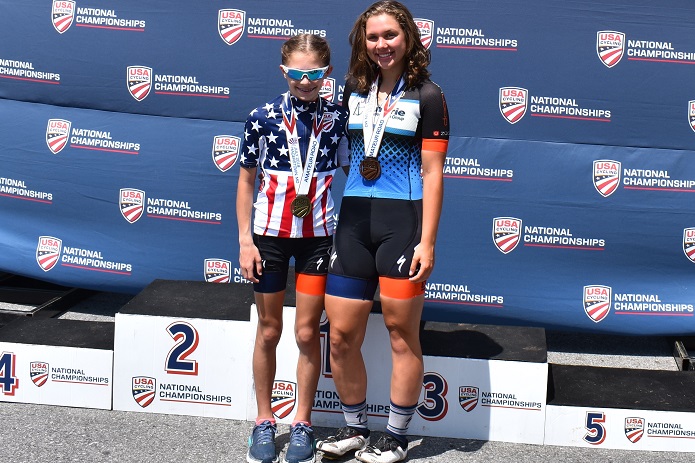 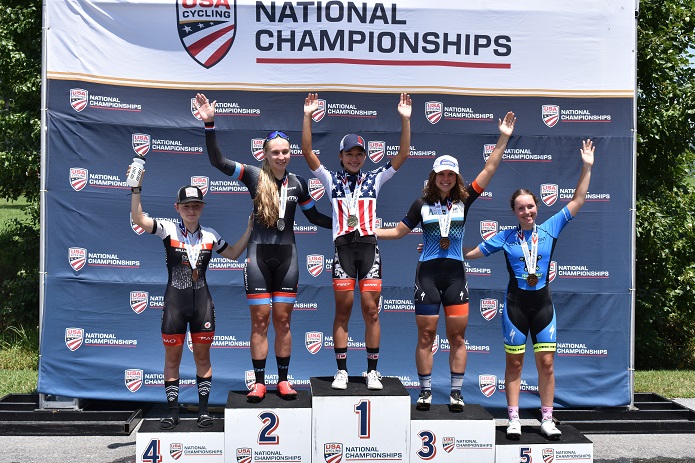 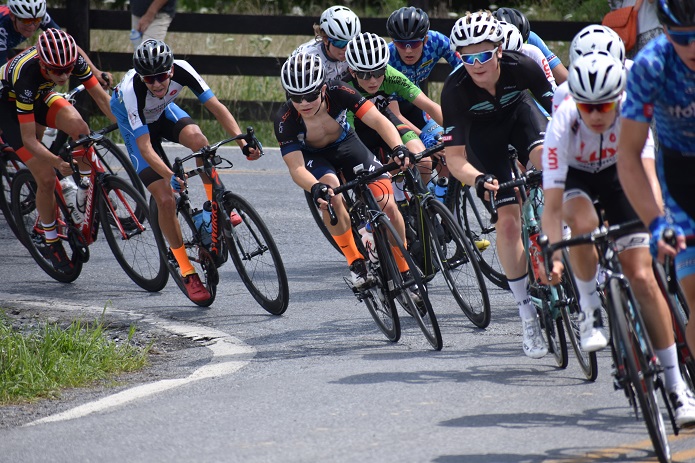 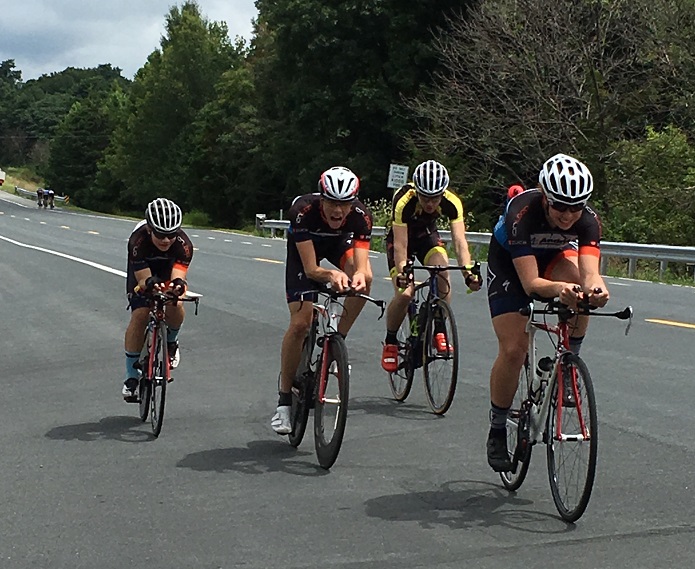 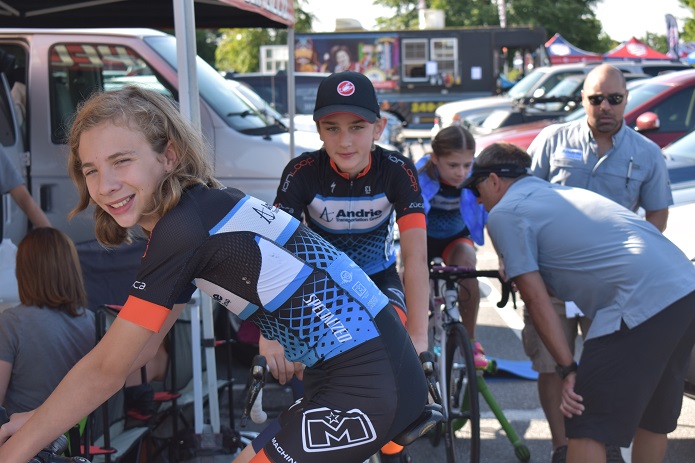 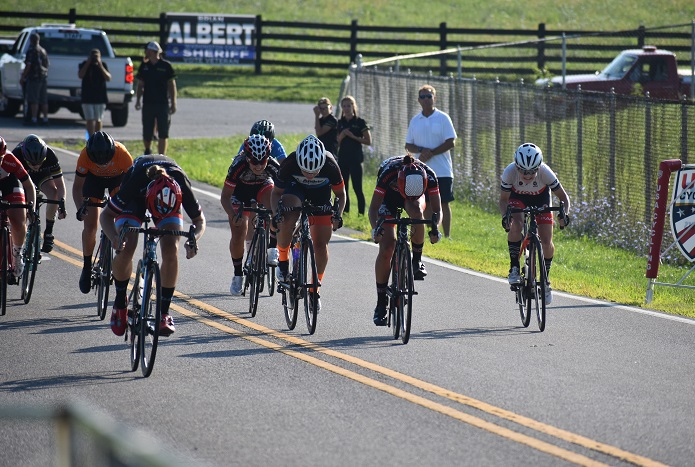 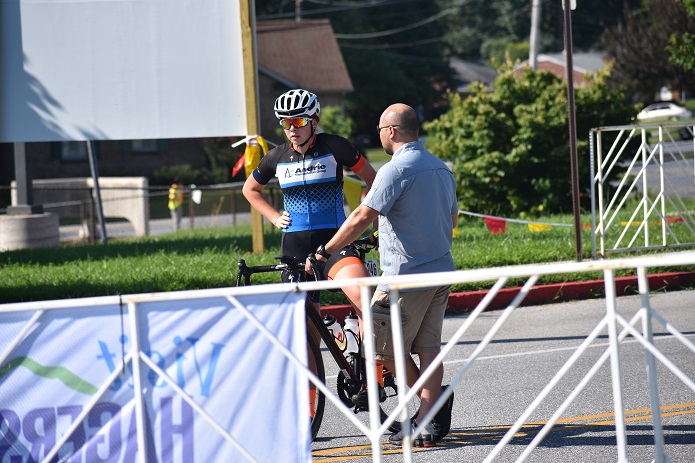 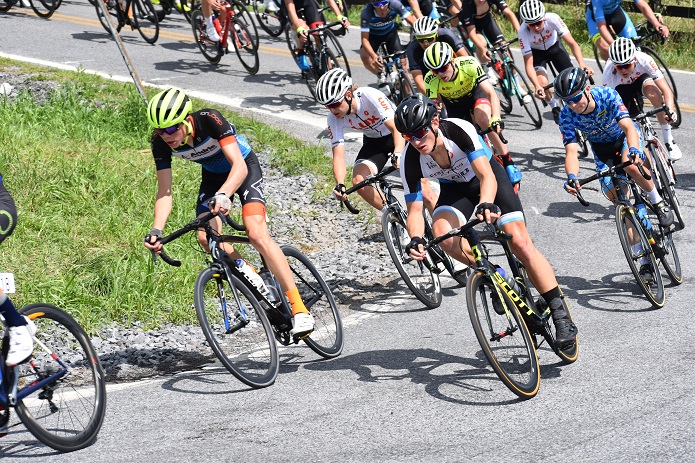 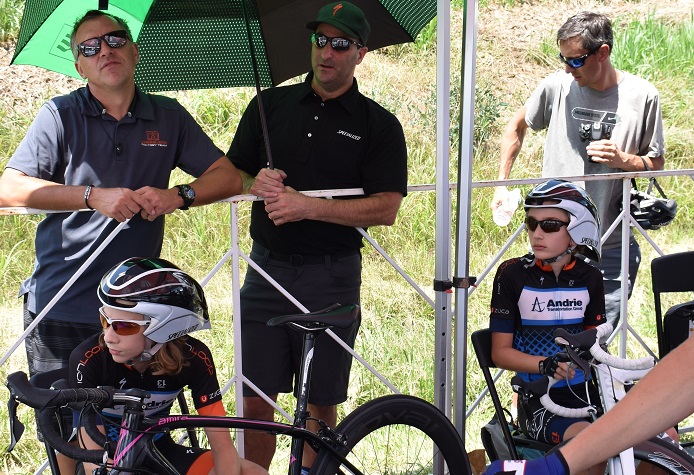 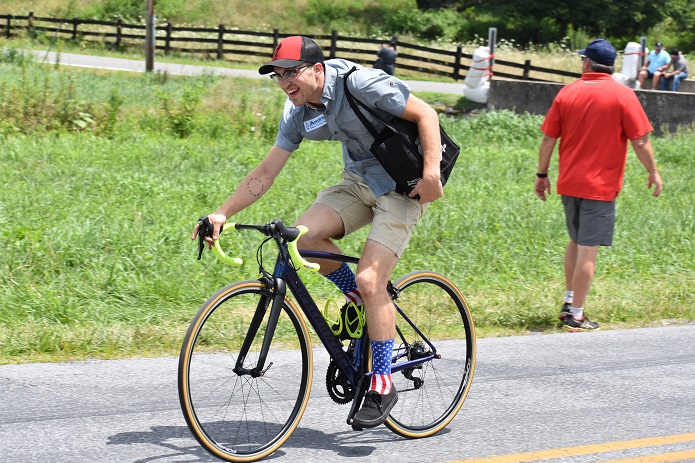 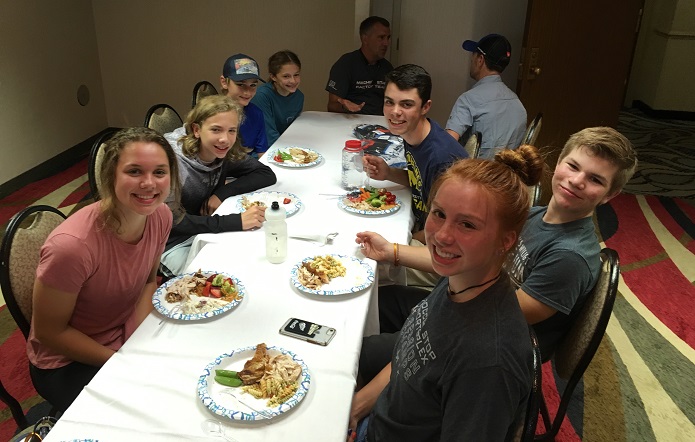 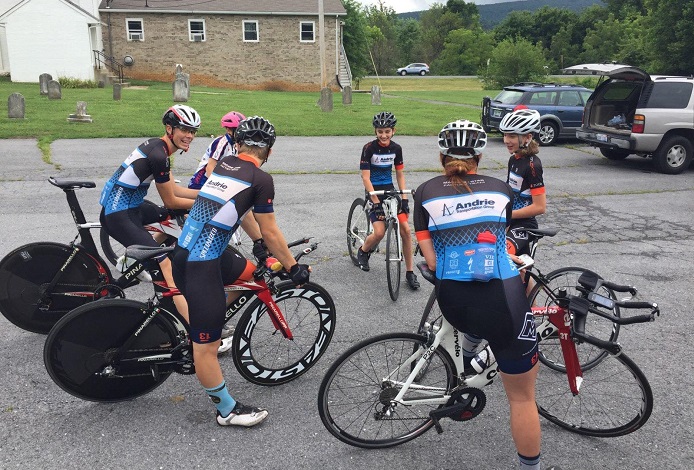 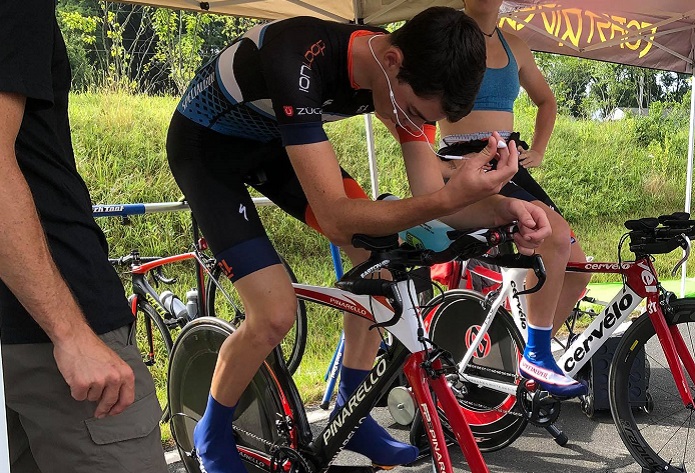 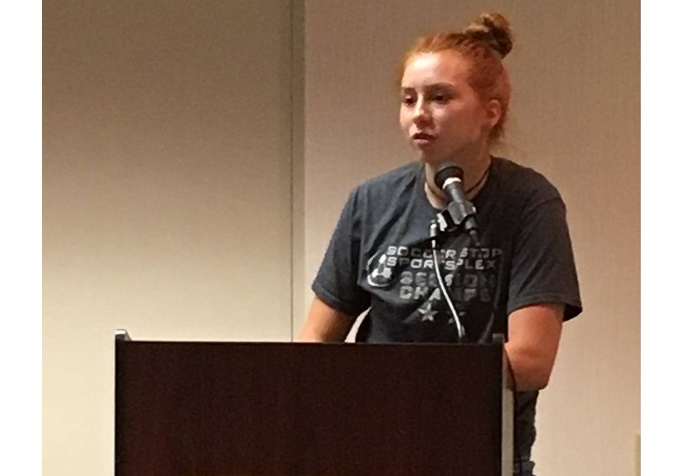 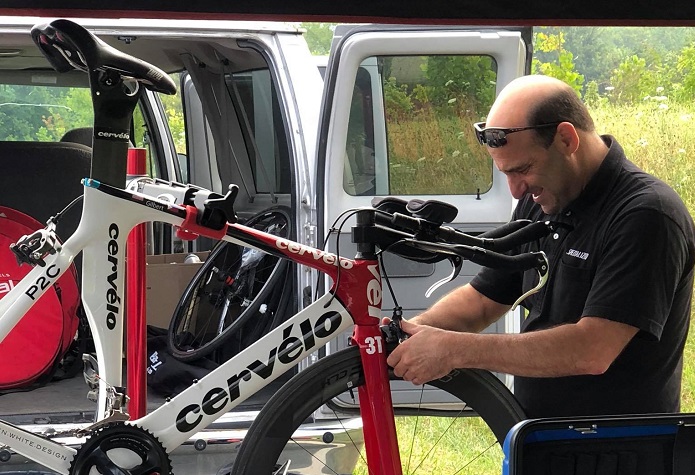 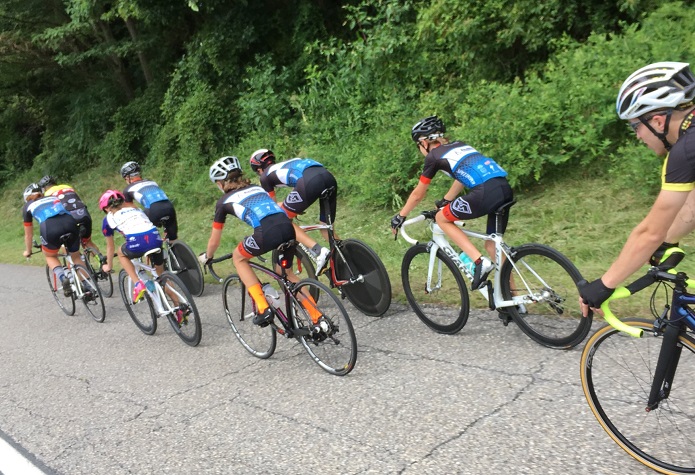 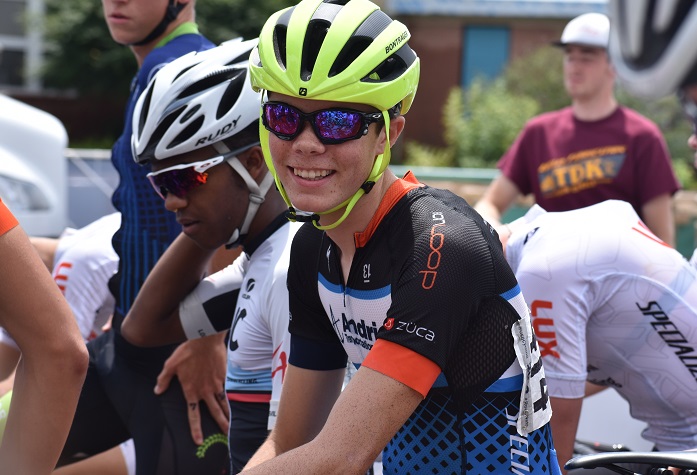 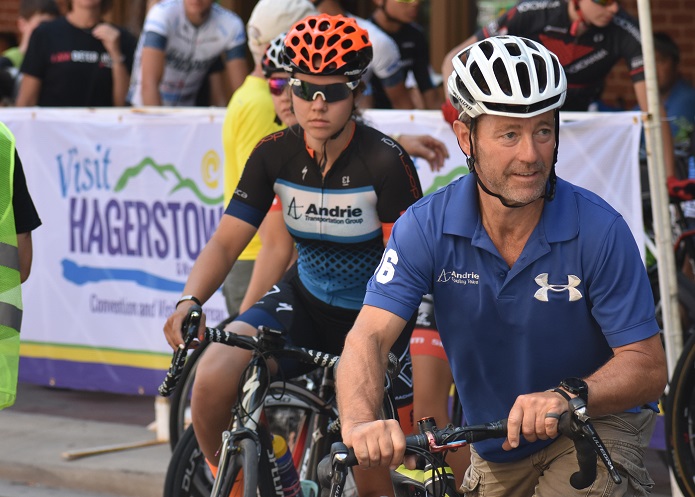 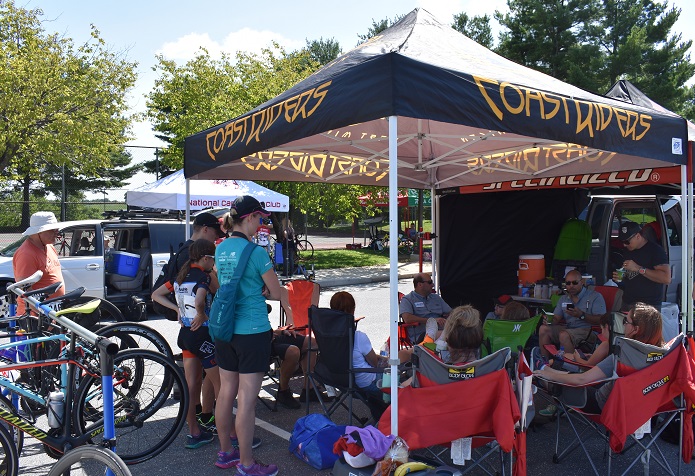 “I think we accomplished every goal we had for ourselves this year and then piled a few more on top,” said Andrie team manager Brant Hendler. “The team definitely surpassed what I was hoping for this year.”

The top 2018 results were driven largely by the three girls on the Andrie team: Clara James Heer (Grand Rapids, Michigan), Carmen Davidson (Byron Center, Michigan) and Summer Gilbert (Hamilton, Michigan). James-Heer captured two national championships and a second place on her own while competing in her first year of nationals at the 11-12 age group. Davidson claimed three top-5 finishes and Gilbert was in the top five in two of her three races.

“I’m really proud of this team and the gains we’ve made over the years,” Gilbert said. “The girls especially had a fantastic nationals and placed every day.”

Despite five of the seven team members being on the lower age limits, the Andrie Junior team still had one of its most successful national campaigns in the team’s seven-year history at the USA Cycling Amateur Road Nationals. The prestigious event includes three individual races over four days.

"Junior Nationals is a unique and complex experience for us, there really isn't anything you can compare it to,” Hendler said. “We lined up for 21 races throughout the week and only two kids race in the same gender and age class. It’s a lot of moving pieces to track and we have to get it right every single time. The staff and parents were awesome and when the riders can just focus on racing it definitely helps them perform at a higher level."

Time Trial
James-Heer set the tone for Andrie from the beginning, winning the USA stars-and-stripes national championship jersey in the time trial with a time of 18 minutes and 18.7 seconds over 10.9 kilometers. She topped the 11-12 girls age group by more than 30 seconds.

“It felt so good to cross the finish line of the time trial and hear that I had the fastest time of my age group,” James-Heer said. “I was really nervous coming into this race because it was my first cycling national championship and I didn’t know what to expect or how well I would do against girls from all over the country.”

Bryce Natter (Brighton, Michigan) clocked in at 18:01.2 on the 10.9 kilometer course for 27th place in the boys 13-14 race. Nicholas Budden (East Grand Rapids, Michigan) recorded 19:33.4 for 38th in the same race to round out the Andrie competitors in the out-and-back individual time trial event held in Boonsboro, Maryland, on Thursday, July 26.

“This was my first nationals so going in I didn’t know what to expect,” Natter said. “I really enjoyed getting to race against teams and individuals from all across the country. It was a great learning experience and I can’t wait to bring what I’ve learned back to races in Michigan.”

Natter added, “The advice from my more experienced teammates and team mentors helped me set up a plan for each race and the team mechanics kept my bike running smooth.”

Road Race
It was more domination by James-Heer in the traditional road race format to lead Andrie on Saturday, July 28. Her finishing time of 36 minutes and 37 seconds was nearly a minute and a half ahead of the second-place rider on the 20-kilometer course in Clear Spring, Maryland, earning a second national championship jersey at the 11-12 age division.

“The road race was my favorite because of the hills,” James-Heer said. “I like to climb and this course gave me a lot of great chances to do that.”

Davidson was again not far behind again, sprinting to an impressive third-place finish in the 15-16 age division. Davidson finished the 38.4-kilometer road course in a group of 10 riders with a time of 1 hours, 7 minutes and 44 seconds.

“The 2018 national championship road race was one of the toughest races I’ve been in,” Davidson said. “It was full of attacks, breaks and aggression. I was able to sprint through traffic finishing third.”

Fox recorded the top boys finish of the week for Andrie in the age 15-16 road race, covering the 59-kilometer course in 1 hour, 31 minutes and 2 seconds. He was part of a 30-rider field sprint at the end, finishing near the front of that group.

“This nationals experience was my favorite because of how much fun I had riding in some of the biggest fields I have raced in, having fun with the team, and talking to all of my friends throughout the junior cycling community,” Fox said. “I am super thankful for the team managers and coaches for making sure everything went smoothly and for mechanics who made sure our bikes were in tip-top shape.”

Gustafson sprinted to an impressive 24th place in the boys 17-18 race, finishing with the main group of more than 40 riders out of nearly 100 total competitors.

“I really enjoyed the week overall,” Budden said of racing at nationals. “The road course suited me with all the hills. I’m definitely looking forward to next year and being in the top of my age group.”

Criterium
All three Andrie girls found themselves in the top-5 on the final day of racing in downtown Hagerstown, Maryland. The final event was a 1.25-kilometer criterium course in timed races held Sunday, July 29.

Davidson highlighted the Andrie racing with her dramatic fourth-place finish in the 30-minute age 15-16 girls event. Early in the race Davidson was part of a crash that left her bicycle unusable. She still managed to get back in the race with another bike and sprinting to fourth place.

“The last day of racing I was very luck to have gotten up from a crash, riding a neutral support bike and taking the fourth spot on the podium,” Davidson said.

“Our team support was amazing, helping us every step of the way,” Gilbert said.

Budden and Natter again finished together, this time swapping places. Budden was 22nd and Natter 23rd in the 30-minute age 13-14 boys race.

Fox maneuvered through the main field for his entire 45-minute race at age 15-16, finishing 28th out of 61 competitors.

Gustafson battled a late crash in his race, recovering to take 38th in the highly competitive boys 17-18 criterium. The 60-minute event became a battle of attrition with Gustafson one of the final finishers to complete the race on his bike.

“Racing was way fast and a huge leap from 15/16 last year,” Gustsafson. “I did alright, but it didn’t end how I wanted with a crash. I raced 600 miles in the last two weeks and crashed in the last quarter-mile.”

Gustafson competed in the prestigious Tour de l’Abitibi in Canada prior to the national championships. He had a number of impressive results in the grueling five-day stage race.

Hendler said all seven Andrie team members raced to their abilities and competed hard throughout the three days of competition. The support of team coaches and mechanics were vital to each team member.

“One of my favorite parts of the weekend was hanging out with the team at dinners and in between the races,” James-Heer said. “The coaches and mechanics were awesome. I felt a lot more confident with their support and guidance.”

The impressive team results capped a two-year run that includes five national titles and 21 top-10 finishes for the Andrie Junior Development riders, quickly establishing it as not just the top elite cycling team in Michigan but one of the most successful in the nation.

“I am so proud of how everyone did and how we all performed to our very best,” Fox said. “I can’t wait for next season.”

The Andrie Junior Development Cycling Team was formed in 2011. The Michigan-based 18-under team works with junior riders to develop long-term cycling skills along with promoting high character. Riders graduate from the Andrie junior team into opportunities ranging from collegiate cycling programs to professional-level racing. See more on the team web site at www.andriecycling.org.