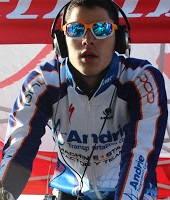 Racing Highlights:
Kevin raced extensively for Andrie throughout Michigan and regionally, including the Chicago area and Iowa. He competed in all three road disciplines: road races, criteriums and time trials. In July 2013, Kevin had a big weekend in Kalamazoo by claiming a pair of second place finishes in the Race for Wishes road race and the Miller Energy Criterium.

After Andrie:
Attends college at Clemson University in South Carolina, where he continues to race with the Clemson University Cycling Team. Kevin returned to West Michigan in summer’s during college to race locally. He also helped younger Andrie team members with bike support at regional races.