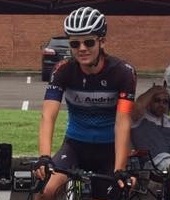 Racing Highlights:
Scott traveled to Georgia, Missouri, Wisconsin, Indiana, Illinois, and Iowa in his summer with the team on his way to qualifying for the Junior National Championships. Scott was second in the Tour of St. Louis omnium in March 2017, taking fifth in the time trial, before a first place and then a second place in the criteriums.
Other Notable Results:
Winner - 2016 cat 4 Snake Ally criterium
Winner - 2016 cat 4 Sylvania Cycling Classic
My Favorite Racing moment was.. Attacking before the last corner at the Sylvania cycling classic and winning.